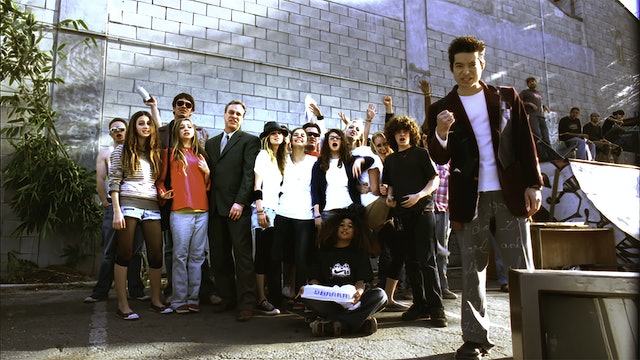 We Want The Airwaves

Filmed over the course of 10 years, "We Want the Airwaves" chronicles the journey of a trio of first time TV makers as they set forth on a daring adventure. The group creates, bootstraps, and films an activist focused docuseries ("Manifesto!") in the year 2005, with the ultimate goal of launching the first citizen’s platform on network television.

Cut from countless hours of behind the scenes footage and interviews with TV & Cultural insiders and outsiders, "We Want the Airwaves" follows the making of "Manifesto!" all while exposing the harsh realities of the ethically challenged unscripted television world.

The roadblocks for the trio quickly become monolithic. Besides the inevitable interpersonal conflicts that develop, how do you sell a TV series which challenges the status quo? The kind of series that advocates for viewers to get off the couch and get active in their communities? A show that requires bold, visionary executives to carry it over the Mount Kilimanjaro of TV network personalities?

As the filmmakers boldly navigate Hollywood, with a nearly blind commitment to their plan, they raise just enough funding to shoot a pilot. As they begin to pitch their series, they are fueled by consistent adulation from their peers & TV executives alike. These accolades bolster their belief that they will change television as they know it and give a broadcast voice to a generation.

Those who are able to tell their stories not only contribute to history, they also impact and engage their communities. “We Want the Airwaves” is a thoughtful exploration of the power of our collective first amendment. It's also a rare, unvarnished glimpse of the dark underside of unscripted Hollywood.